Faith, our Huna Tlingit guide for the day, told the story of how her people lived on the broad valley, where Glacier Bay exists now, until, in the 1700’s, the glacier began to advance “as fast as a dog can run.” The people fled and by 1750 the glacier filled the whole valley. Vancouver recorded its location in 1795 and John Muir found it had retreated forty miles when he visited in 1879, confirming his belief that glaciers carved out bays and valleys like Yosemite. Now the glacier has retreated sixty-five miles up the bay, leaving “small” tidewater glaciers. These glaciers are still actively retreating and we got to see some calving and lots of little icebergs or “bergy bits” as the crew called them. 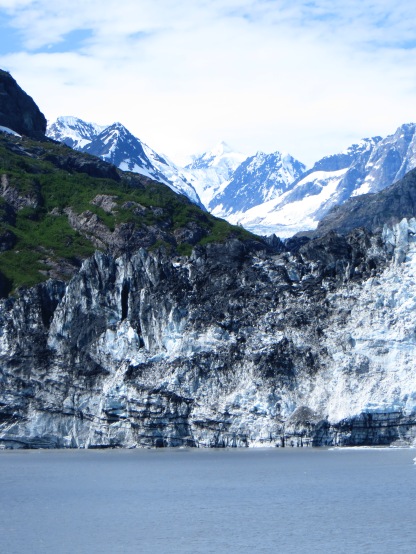