After my June trip to the Yucatan I wrote up a little report on the birds I’d seen there. I’m posting it for anyone who’s interested. I wasn’t on a birding trip, and had to fall behind whatever group I was with when I was trying to look at some bird. Also I’m an amateur. If I’d been with an experienced birder like Nanci Adams, who teaches birding through Pajaro Valley School District adult education, I’m sure I’d have seen many more. The fact that I saw as many new birds as I did attests to the remarkable numbers of to be seen there.

The most numerous bird, and the one I saw (or rather heard) right away was the great tailed grackle. They were everywhere and with an amazing repertoire of whistles and calls. Also called a clarion bird for their calls.

In Uxmal I saw several great kiskadees, a pale billed woodpecker, melodious blackbird, an oriole – either hooded or Altamira, and cave swallows (in their nests inside a cave-like ruin).

Near the entrance to a cenote at a hacienda I saw several blue crowned mot mots (the most spectacular bird I saw on the trip- there were three on a branch even though you’re only supposed to see individuals or pairs). I posted a photo on my June 20 blog. Also saw white winged doves, which I saw lots of places after that. Black vultures as well as turkey vultures.

At Chichen Itza male golden fronted woodpecker in and out of its hole. Flycatchers – probably brown crested, yucatan jays? – not sure from the view I got.

Isla Contoy national park – a rookery for magnificent frigate birds and other. 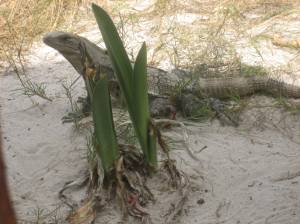